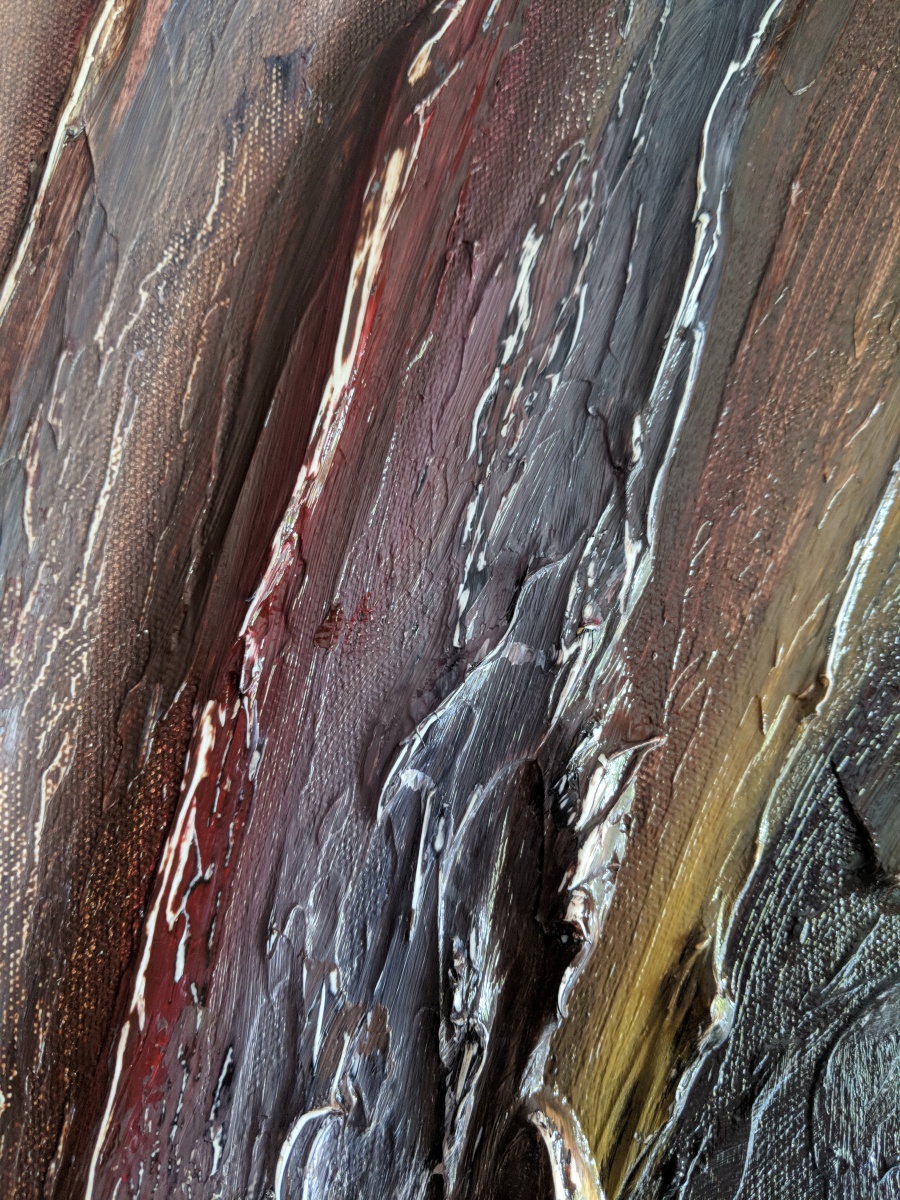 This sounds like a lot, but it certainly doesn’t feel like a lot. With a two week holiday away coming up , it effectively reduces my remaining preparation time to 3 and a bit weeks. With the two weeks after getting back from holiday likely to be devoted to frantic last minute activities, such as photographing work, producing the exhibition brochure and title cards, the last few bits of varnishing, and a last push on trying to get people to actually come along, I’ve known for a while that I really needed to get all of the actual painting done before I go on holiday.

At no point when working out how I could achieve this, did I actually expect it was achievable. Yet, I’m somehow now down to the last 2 pieces which are both about half done. They will either come together pretty quickly in a single painting session, or will be a complete pain that take many sessions to get them to where I want them. There is no in between with my work – it either works straight off, or becomes a long hard fought battle. And it’s also not easy to predict which of these extremes each piece will turn out to be!

I say I only have the last two pieces to finish off, but that does hide one teensy weensy point of detail. They happen to be the two largest pieces in the show. And when I say large, I mean considerably larger than the bulk of the work. So large that getting them to the show is itself going to be a challenge. As you can imagine, it’s at this point that I’m constantly asking myself the question “Why did I have to commit to doing such large work ?”

Working large – and making a rod for my own back

The answer to that, of course, is that the exhibition has to be right. The effect of my blended textured abstracts and landscapes could get a bit lost when working small. The bigger the piece, generally the better the ideas translate to canvas, the more striking the result. Big it has to be. As someone once said “Go Big or Go Home”.

Ironically, all of the smaller, but still by no means small, work has come together without too many mishaps. Sure, there have been a number of changes of direction, a number of instances where I’ve ended up painting something quite different to what I expected at the outset. Indeed, a weekend on Dartmoor that I returned from just a week ago today has yielded 3 pieces. Moreover, those 3 pieces are from the same short walk. It will be interesting to see if the people I did that walk with, who I’m expecting to come to the show, can recognise which the 3 are.

One of the consequences of the list of works evolving as I’ve painted them, is that what will be in the exhibition shows an evolution – not of several years, but of a couple of months – in my style. The fact is that working so intensively, and needing to, has meant I’ve taken some risks. And whereas at the start of the process my work focused almost exclusively on pure texture, the later works reflect a lot more blending of colour, and this in turn has affected my choices of both what to paint and how to paint it. So I’m going to end up with a lot more variety in the work in the show than I envisaged at the start. This is not a bad thing – it widens the potential appeal and makes it more likely that there will be something for everyone. It also means that the show will be a lot more colourful than I originally imagined. It will certainly be more difficult to curate now!

The show will also include a few of the smaller prototype pieces that featured in “Blended”, also at Nolia’s at the start of August, and now they will be able to seen alongside the final larger works.

I’ll leave you with a few teasers of small segments of some of the work that will be on show to wet your appetite. Hope to see you at Nolia’s Gallery, 60 Great Suffolk Street, London, SE1 0BL between 1-6 October. Opening hours are 11am – 4pm and the private view is 6-8pm on Thursday 4 October. All welcome.